India Is a Country of several Ethnic community and we all have our different ways of expressing ourselves and movie is one of the reflection of our daily lives and several movies reflect and upscale Indian Culture in Global Stage. Bollywood is one of most popular name in world movie industry after Hollywood, and India Post have honored Bollywood in several stamp issues . Bengal's contribution to Bollywood industry is astonishing . Bengal is one of most culturally rich ethnic community and their contribution to industry is astonishing be it a movie direction /actors/Singers/Music directors. i am trying to put some stamps issued in remembrance of Bengal's Contribution to Bollywood and Indian Movie industry !!!

let's start with movie direction the one of best ever produced by Bengal ever : Ritwik Ghatak and Satyajit Ray stamps issued respectively in 2007 and 1994 , here you See Ritwik Ghatak in the background with his famous movie : "Meghe Dhaka Tara" released in 1960 and Satyajit Ray won Oscar for his movie "Pather Panchali"(Song of Road) based on award winning novel of Bhibhutibhusan Bandyopadhyay .

I like to mention here another famous Bengali Director Bimal Roy Who have produced such master piece of movies like: "Do Bigha Zamin","Parineeta","Biraj Bahu" and Nitin Bose,Tapan Sinha,Hrishikesh Mukherjee who were honored in stamp issues too .
Let's take you to the music industry where several Bengal based Singers enriched the Indian music by their timeless Songs .India Post rightly respected several of them in several Stamp issues namely on Kishore Kumar,Manna Dey,Hemant Kumar,Bhupen Hazarika ,Salil Chaudhary,Sachin Deb Burman and his son versatile Rahul Deb Burman. Sachin and Rahul Deb Burman were one of most pioneers brought western punch in Indian music and were able to make perfect fusion.Below few stamps and postcards shows the people behind Indian music industry.

lets talk about few actors namely Uttam Kumar , Ashok Kumar,Dhirendranath Ganguly .Uttam Kumar was a legend of Bengali movie industry who acted a wide range of Bengali movies and was a real legend and India Post honored him in 2009 Issue , below are few stamps and postcards issued to commemorate 100 years of Indian Cinema,hope many more glorious years to come . i am ending this here now as too many stories to tell if i want to continue :)

P.S. This article got published in "Chalachitrita" published in June 2019 , on account of  3rd Bengaluru Bengali Kannada film festival organised by "Satyajit Ray Film Society " Bengaluru.
Here is the Cover picture of the Same . 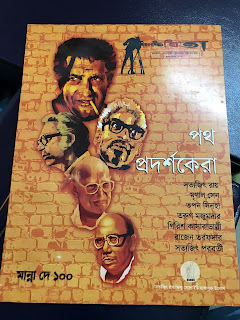