The Girl with Green Eyes!!!!

Since long i have seen the photograph on internet and National Geographic site,this picture of this girl with green eyes caught my attention!!! It almost became to me the face of Afghanistan since then. So when i got a nice picture postcard featuring this girl i could not help but share this joy with you,you can see my excitement as i am writing in my blog almost after a very long time!!! 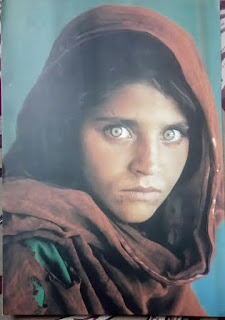 like other cards this card also have its own story to tell.. This is the picture of Sharbat Gula. She was photographed back in 1984 by Steve McCurry,which appeared as cover image of 1985 National Geographic Magazine. 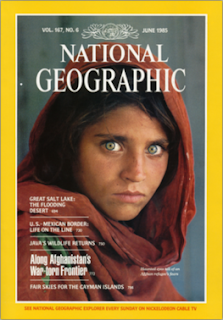 Back then she was living as a refugee in Pakistan during the time of Soviet Union occupation of Afghanistan . Her eyes bold,straight looking to the camera was described as most " recognised photograph" in the history of NGM. McCurry made several unsuccessful attempt to locate her during 1990s, finally  in 2002 a NGM team traveled  to Afghanistan and found her. No wonder many girls claimed themselves as Sharbat and many husbands claimed their wives as her :). Finally she was identified at an age of 30 in a remote region of Afghanistan,since she went back to her native in 1992 leaving the refugee camp. She recalled being photographed . And in 2002 she first time saw her picture which was shooted way back in 1984. 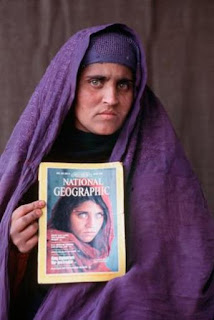 She was happy to pose with the iconic issue of the NGM in 2002.

Well it was quite a search isn't it?