Hello my fellow collector friends after a long brian storming session on what topic to write i have chosen this mountain railways in India..
Mountain Railways of India is a UNESECO heritage Site
As you all know India is a country diversity so we have many high ranging mountains in both in northern and southern part of India
Here is my small effort to represent them through my stamps:)) Hope you will like it..

There are six or seven railways lines built in India during early 19th and 20th century during the British period..

The mountain railways of India are as followed:


1)Darjeeling Himalayan Railways:
It was built in 1881 during British rule in India..It runs from Siliguri to Darjeeling,in West Bengal
It is often called as toy trains are one of the tourist interest there ..The highest elevation of this railways in Ghoom station its about on 2300 meters(7,500 feet) ..
In 1982 India have issued a stamp on this railways..as shown below: 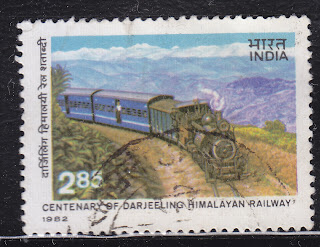 The wonderful FDC is showing a nice mountain range of Himalaya 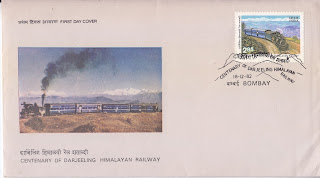 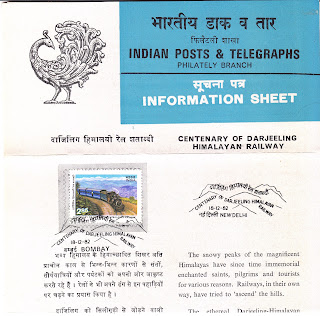 Bhutan issued a wonderful SS on Darjeeling Himalayan Railways in 1984... 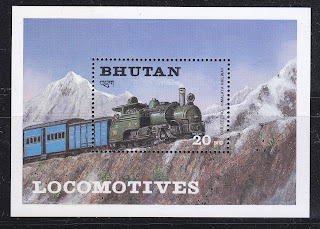 2)Kalka Shimla Railways: Shimla is the capital of Himachal Pradesh..a wonderful hillstation where i always wanted to visit but so far no luck yet:(..It's on 2,205 meter(7,234 Feet)..and it was summer capital of British India..The railway line was constructed by the Delhi–Ambala–Kalka Railway Company commencing in 1898 in the Siwalik Hills ranges..
The line has 103 tunnels and 864 bridges (multi-arched gallery type, like the Roman aqueducts)

India Post issued stamps to commemorate the 100 years of this Kalka-Shimla Railways..in 2003
Here is  a wonderful blk of 4s and the FDC here 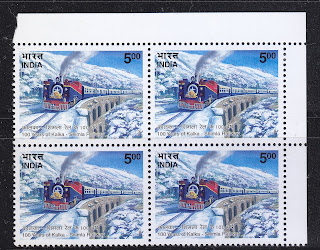 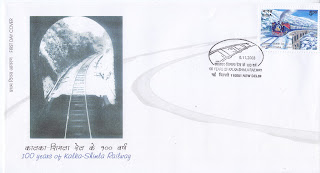 3)Kangra Valley Railways: The Kangra Valley Railway lies in the sub-Himalayan region and covers a distance of 163 kilometers (101 mi) between Pathankot and Joginder Nagar, a valley known for its natural beauty and ancient Hindu shrines
India dont have any stamp on this railways so this is the picture from
http://www.indianrailways.gov.in/ 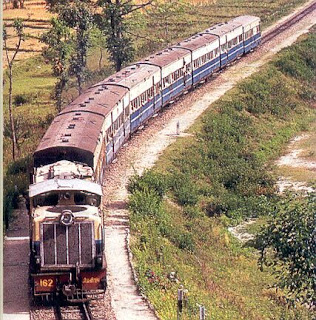 4)Kashmir Valley Railways: It was built for Jammu and Kashmir to communicate with rest of India.. The railway starts from Jammu and, when completed, will travel for 345 kilometres (214 mi) to the city of Baramulla on the northwestern edge of the Kashmir Valley
The scheduled date of completion was August 15, 2007. However, several unforeseen complications have pushed back the final completion deadline to 2017 at the earliest so a through service from central India to Kashmir will not be possible till then....

5)Nilgiri Mountain Railways :It is a single track mountain railways in southern part in India. Coonoor was initialy the last station till june 1989 but it got extended further to Fernhill in september,1908 and to Udagmandalam(Ooty) in October 15th ,1908..The Nilgiri Mountain Railway was inscribed as World Heritage Site by UNESCO in July 2005.Ooty is a wonderful place and one of my finest holiday destinations:) i was there 2 times but we did not have time to ride the railways:( Next time i proise i will surely do and update this blog:)LOL

Here is the wonderful postcard of Nilgiri Railways in Ooty.. 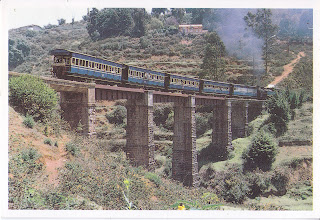 Special Cover issued by India post to comemorate the Centenary of Coonoor -Udhagamandalam Railways on the 9th Novermber,2008

6)Matheran Hill Railways : Last but not least the Matheran Hill Railways which is one of the heritage railways in Maharashtra built in between 1901 and 1907..The railway line, a 610mm (2 ft) gauge line, covers a distance of 20 kilometers (12 mi), over large swathes of forest territory connecting Neral to Matheran in the Western Ghats hills near Karjat and Mumbai. The line, which generally used to be closed during the monsoons because of the danger of landslides, has, since the 1980s, been kept operational throughout the year. 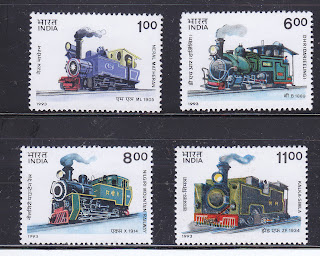 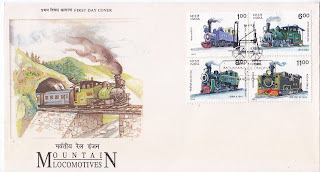