In July 1973 the Isle of Man Post Of fice became an independent
postal administration..I make my small attempt to look in to different aspects and designs of
IOM stamps which are in my collection so far..I  have just selected some stamps to show
them how unique they are in their design, beauty .The few best things i like about their stamps are

1. Mostly they have strong relevance with Island history and islandic people or Great Britain
connection .
2.The number of issues per year are very much under regulation
3. Even in the philatelic bureau also you wont find much older stock

The first postage stamp designed especially for the Isle of Man was issued on 18 August 1958.
Local committees were formed to invite and instruct artists, and to adjudicate on the submitted designs.

So here goes some of the finest IOM stamps in my collection.

1. To start with it is from the very first set issued in 1973 designed by John H Nicholson.
the stamp shows Port St.Mary 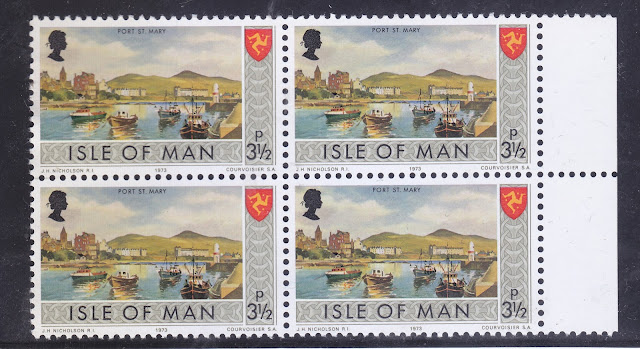 2. This is another stunning issue from 1985 the £5 definitive portraits the Queen.
The main charm of most of the designs that local artists and designers were given priority.
This one was designed by Colleen Collett. 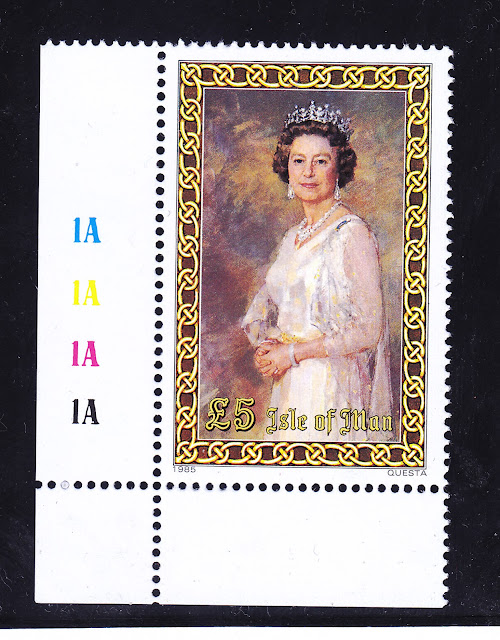 3. The invasion of Norse Vikings are shown in many stamps as well here one goes from 2008 set showing the Viking..so again an islandic relevance . 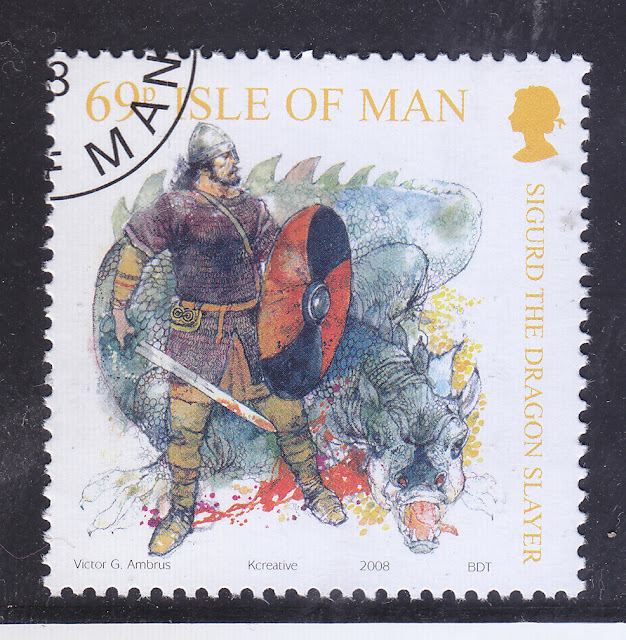 4. Now comes my very favorite artist Dr Jeremy Paul who is mainly a wildlife artist. IOM issued many sets designed based on wildlife paintings by him and to me and most of the stamp collectors they are just wonderful.Here goes the sheetlet of the Manx Birds  Atlas which is  designed by him and also carries his signature . 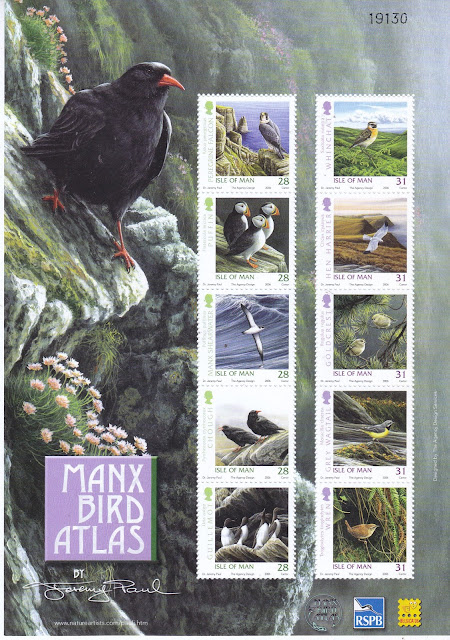 5. As I said earlier local islandic relevance is very common in designs...the 2004 Souvenir sheet shows the commemoration of 150 years of the Great Laxey wheel..Which was build way back in 1854 .
The Laxey Wheel is the largest working waterwheel in the world.
The wheel is water-powered since the Isle of Man does not have a supply of coal but does have an plenty of water resource . 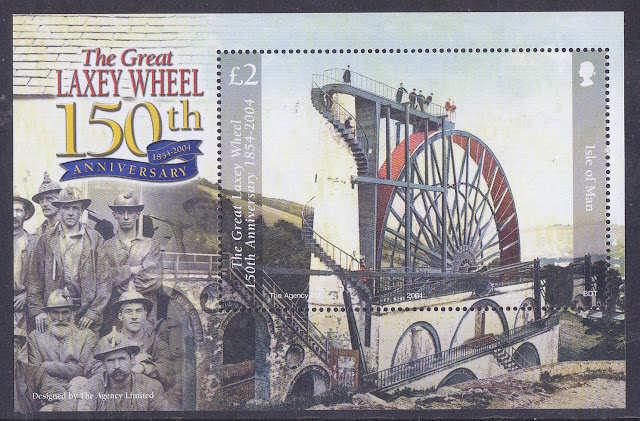 Notice the left hand side of SS shows inscription designed by the Agency Limited. That is the fact that there were design agencies were formed with well known mostly local artists who used their all skills together to design together some great issues of IOM .

6. Another great issue of IOM is the 2003 issue showing Lord of Rings Triology  . The set consists of 8v and 1 SS.The stamps again designed by the Agency as mentioned above .The stamps shows the movie stills and interestingly the 27p shows John Rhys Davies ,who is a resident of the island. 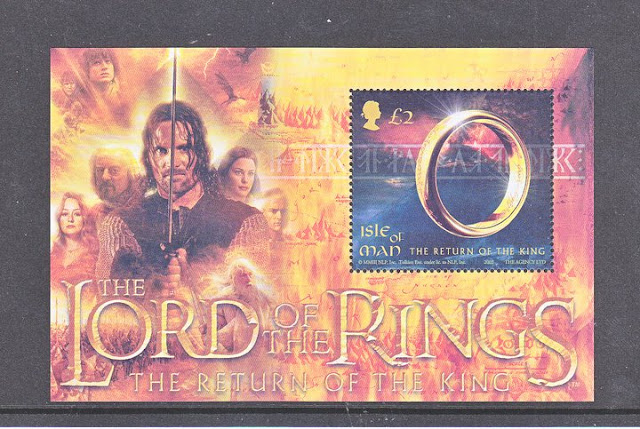 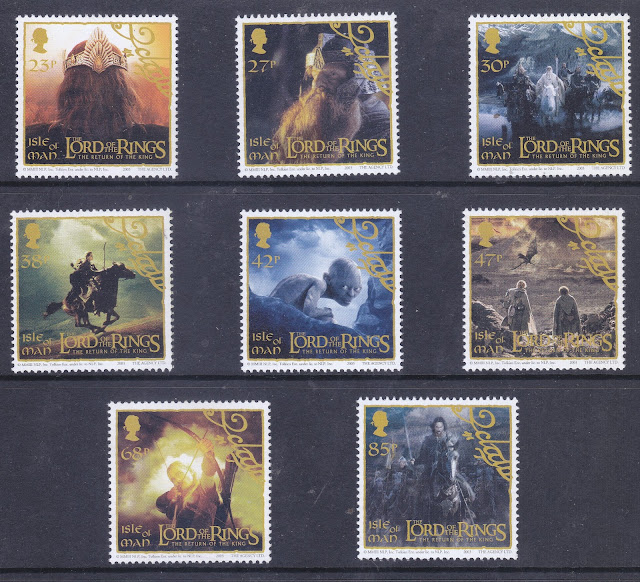 7. Time to time the island issued stamps to show the Manx heritage..There are many as such they are maintained and promoted wonderfully through the stamps which helped in return generating good amount of revenue by tourism .
Below is the full set of 2004 Manx Heritage set .

8. The relation with UK and sports illustrated in different issues one of them is 2009 SS showing the Ashes series which is one of the greatest series in test cricket where two super power England and Australia plays each other..Its very much  respected series in the great game of Cricket and both countries  take amazing pride in winning it .

9. War and peace shown in many issues..one of the most beautiful and meaningful to me is the below SS from 2008 a tribute to 90 years of end of the WWI .. 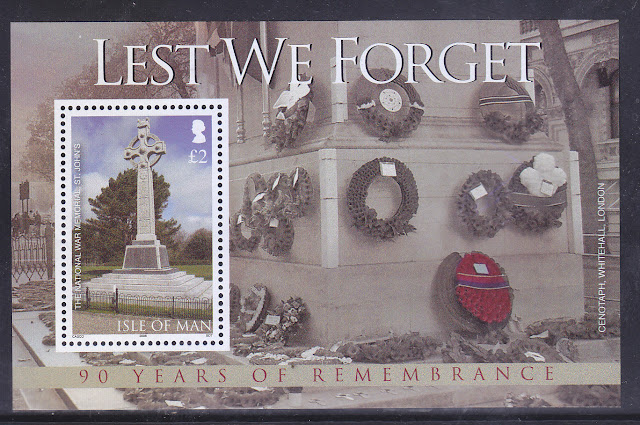 10. Last but not least he participation of different international commemorative events.
The SS was issued in 2007 to make a step forward like many other countries for Global warming and celebrating the International Polar Year.Thanks to IOM post for sending me as gift.

and from the year 2007 IOM issuing stamps as a member of SEPAC(Small European Postal Administrations Corporation).It issued in 2007,2009,2011 3 stamps all are wonderful depicting beautiful corner of Europe.Among 3 stamps i chosen the 2007 one which i like a lot showing the European Vintage ploughing championship .I am waiting for this year SEPAC from them the topic is Baby Animals. ) 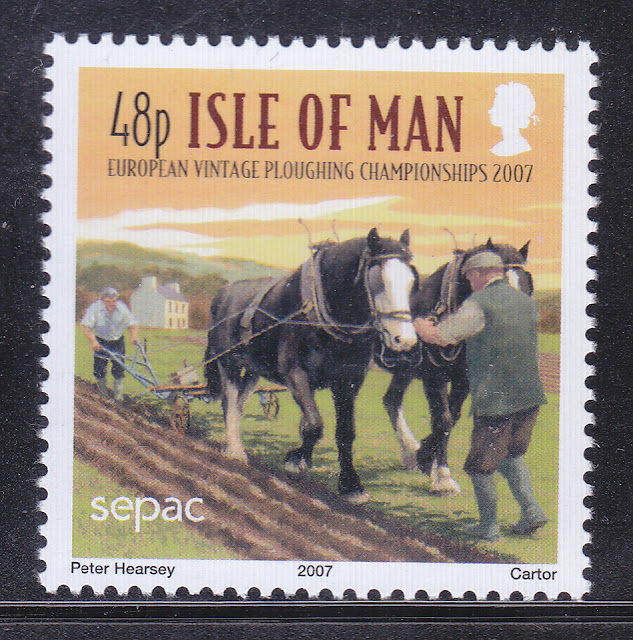 If you like IOM stamps either you can order them from:
http://www.wopa-stamps.com/
or you can directly order from their site: http://www.iompostoffice.com/stamps/
I am sure you find them worthy enough to collect .